The Cops n Robbers game offer players a popular theme and on this action packed slot which is just one of the many Online Slots UK available at most popular Microgaming Casinos where you will be taking on the character of the robbers and your task is to simply try and bag as much loot as you can whilst at all times trying to keep well away from the cops! 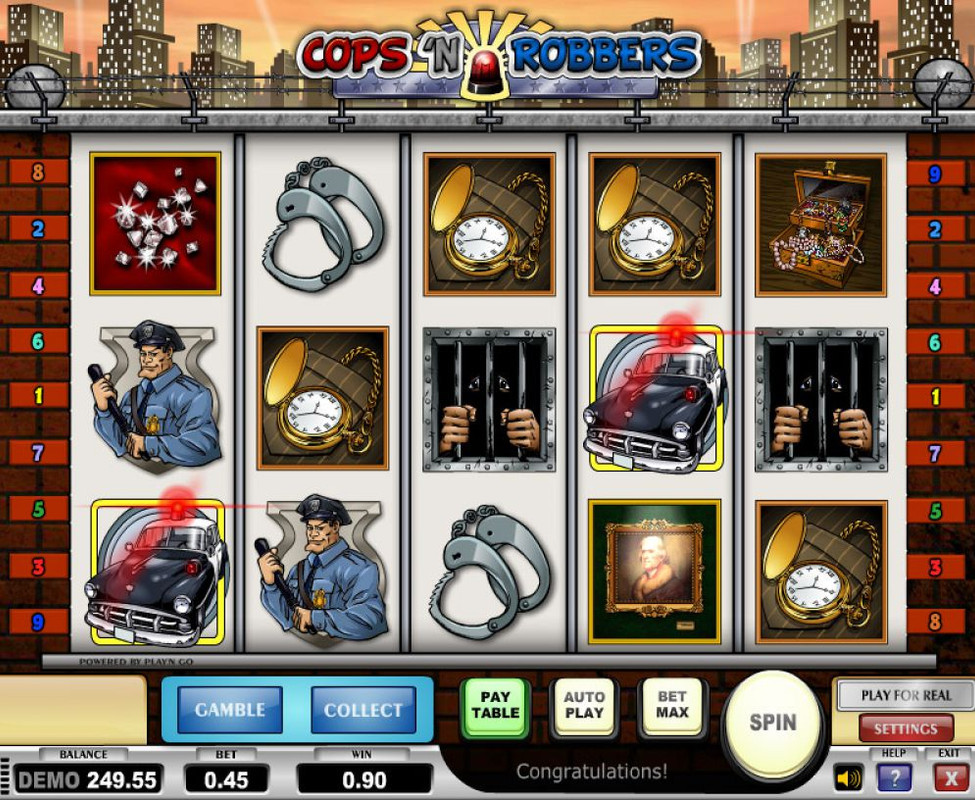 The Cops n Robbers fruit machine is a single payline game as are most fruit machines, and to trigger and launch the bonus feature round you first need to spin in, anywhere in view three of the Money Bag symbols, once you do the board game screen is shown and this is where you will play out the bonus round.

BASE GAME FEATURES ON THE COPS N ROBBERS FRUIT MACHINE

Nudges – The best part of a Fruit Machine is often the nudges feature, once awarded you are given the option of being able to move any of the reels downwards in the hope that you will be able to complete a winning combination once you have moved them.

Gamble Nudge – You may be offer the chance of gambling once you have been awarded the nudge feature, this allows you to either increase or decrease the number of nudges you have, in the hope of winning enough of them to be able to complete a winning combination.

Nudge Repeat – This is awarded at random after you have used all your awarded nudges and have been unable to complete a winning combination, another set of nudges are instantly awarded to allow you to continue nudging downward the reel symbols.

Hold – At random and before a new spin has been made the Hold buttons directly underneath each reel symbol may illuminate, when they do that means you can choose any or all of the reels to hold and this will lock them into position for the next spin.

Get Away Feature – This is awarded at random and will lock in place one reel symbol and then award you a winning spin containing that respective reel symbol.

Let ‘Em Spin – This is a hidden feature and once you have used your nudges and have only managed to spin in two matching symbols if the alpha numeric display saying Let ‘Em Spin, then don’t hold any symbols and just spin the reels and you will be awarded a winning spin.

Get Away Feature – This is awarded at random and will lock in place one reel symbol and then award you a winning spin containing that respective reel symbol.

Hold This Reel – If one reel begins to shake and the alpha numeric display says Hold This Reel, then hold the reel that shook and you will then spin in a winning combination.

Chaser Trail Bonus Game – When you have spun in the three Cash Bag symbols you are the sent, via a new screen, to the feature board, here you are faced with making you way along this trail and on each position you can win one of several different features or cash multipliers.

You can collect any of the feature games or cash multipliers or you can continue along the trail by spinning the number reel, but by doing so you risk losing and ending the bonus game should you be caught by the policeman who will be chasing you along this trail, the higher you progress the better the rewards for doing so are.

Start – Once you trigger the bonus game you will begin your adventure from this position.

Continue? – This is a Yes or No game where you need to click the stop button to reveal whether you are allowed to continue playing by hitting the yes light or if the game will end by hitting the no light.

Carry On – This means you are OK, and you may carry of spinning the number reel. Lose – This is the end of the line and the bonus game ends here. Boost – This will boost your position on the board to a new one further along the trail. Skill Continue – Here lights will move along the word continue and you must skillfully stop these lights on the last letter (E) to enable you to carry on playing the bonus game.

Bonus – If you land on this square you are awarded a random additional bonus and these can be any of the following.

Extra Life – This gives you an extra life, should you end the game as you progress up the trail then this is cancelled out by this extra life and you get to carry on playing.

Boost – This will award you with a new position on the feature trail.

Taxi – If this is awarded then the positions that are directly after and before your current position will flash, you need to hit the stop button to find out whether your are going to be moving forward or backwards as your new position!

Move Again – The number reel awards you with a new number and you get to move to the new position, the policeman will not be awarded a spin thus you can get further away from him.

Restart Chance – This will award you with a 50/50 chance of entering the Feature Trail again once you have finished the current game, once it ends you are offered a Yes/No chance of re-triggering it by hoping the light you manage to illuminate by hitting the stop button will be the Yes one!

Nudges – You can be awarded a set of nudges which grow as you progress along the trail the number of nudges are displayed on the square you have landed on which can be as many as 50 of them. Once awarded you are then sent back to the base game to play out this nudge feature.

Win Spins – When you collect this feature you are then sent back to the base game where you will be given a set of reel spins which are guaranteed winners. You can win from two up to twenty of them.

Multiplier Values – Landing on any of the multiplier values and collecting them will result in you winning the relevant value multiplied by your stake. The bonus features are:

Costa Del Cash – This feature will return you to the base game and all of the symbols that are positioned around the pay line will begin to flash you need to hit the stop button to highlight one of them, once done the reels will then drop in a winning combination of your chosen reel symbol.

It’s a Fair Cop – Once you collect this feature all of the winning combinations will flash on the pay table, you need to hit the stop button to choose one of these and that winning combination will then be spun in and awarded to you as a win.

The Repeater – This is awarded totally at random and gives you the chance of winning the multiplier value again.

Doing Time – This will send you back to the base game and the reels will spin, every time one of the Cash Bag symbols appear then one of the payouts on the pay table lights up, once the reels cease to spin the award you have highlighted on the pay table is the one you will be credited with.

Ello, Ello, Ello – Three cash awards are shown on the alpha numeric display, these then are hidden and shuffled around and you have to pick one of them to reveal your winning cash prize.

Swag or no Swag – Here you are awarded a random cash amount, you are then given the option of collecting this figure or risking it be gambling it for a higher payout.

Inside Job – Collecting this feature returns you to the base game where a guaranteed winning spin will be given.

Whistle Blower – This will sends you back to the base game where all of the reel symbols in view will begin to flash, simply hit the stop button to select one and then you will be awarded that symbols respective winning combination as displayed on the pay table as a winning spinning.